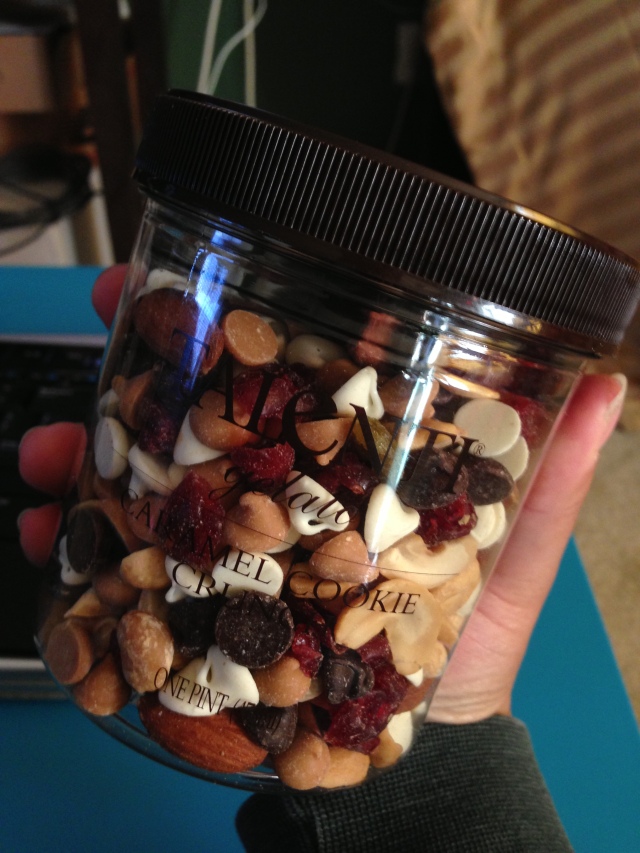 You know, that Talenti Gelato is totally worth the four bucks. First of all, the Caramel Cookie Crunch is freaking AMAYSING and then it comes in this totally awesome thick plastic container, which being Big Momma Bee’s daughter means that I’m reusing this thing until it becomes questionable. I filled it with some WalMart (I know, I know, but I’m broke and it’s cheap) “Indulgence” Trail Mix. I’ve decided, after discussing eating habits with my good friend Miss Kitty, that I would become a muncher. I mean, if I snack on some reasonably “healthier” snacks, I should stop with the wonky binge eating that I’ve been awkwardly doing. It’s really annoying to binge eat. I see the food and I KNOW I shouldn’t finish it if I’m full, but somewhere in the back of my mind, something tells me to finish what’s on my plate. I need to stop having eyes bigger than my stomach, as my mom says.

I decided, after staring at the trail mix bag for a minute (did you ever realize how long a minute is when you’re actually paying attention?) that instead of buying another bag, I’ll just make my own. Maybe add some nutella drops… mmm… I did say reasonably healthier, not just healthier, I can’t with some of those “healthier” options. They’re too…. BLEH.

Ooh! Also, I finished chapter one of my novel, which I’m totally proud of accomplishing, especially since I started the damn thing last October. Now I haven’t just been working on chapter one this entire time. My befuddled brain likes to skip around write the bits and pieces that come to me during the day. I know the order in my brain, which helps me keep it all on track.

As I’ve told you in a previous post, I am doing Camp NaNoWriMo this April. I decided on a goal of 75,000 words, but alas, as I’m halfway through April, I don’t think that will be a reasonable goal. I think perhaps I shall change it to 30,000. It’s unfortunate, but I also realized that 75,000 would mean I’d be just about done with my novel. And I don’t want to rush the awesome out of my brain. I’ll suffer from burnout. Plus I’m not always thinking about the story. There’s too much going on in that hectic little skull.

I can only imagine how insane it must be in my brain. I am a bit of a hoarder in real life and if I’m honest, as well as on my laptop. So if that’s the case, my brain must be insanely packed with random bits of information. I keep so much in there, maybe it needs some spring cleaning. If I could erase some of those mundane memories, it’d be great, because a lot of those give me anxiety. I guess it’s time for electroshock therapy. But what if I lose my novel in the process?! Eh. I guess I’ll just keep my big jumbled brain for now.

Messy Meesh: Learning How to Cook and Live a Happier Life
View all posts by mischameesh →
This entry was posted in Writing and tagged nanowrimo, Writing. Bookmark the permalink.