Abner: The Love Child of a Japanese Discount Store Magnate and a poor Korean Chef

Once upon a time, the son of a very rich man was sent to South Korea to find things to sell in their chain of discount stores. After a very long day of meeting after meeting, he felt the urge to do a bit of sightseeing. Paying too much attention to the map in his hands, he took a wrong turn and ended up in a place not befitting to a young man of his wealth.

He looked up and realized his mistake, but was immediately distracted from the delicious aroma coming from a building down the street. He went into the restaurant and asked the young store owner to make a plate for him. After the first bite, he fell in love with the food and the pretty little chef.

He spent the rest of his free time in South Korea with the chef, tasting all the wonderful creations she could cook. He had planned to marry her, but made the mistake of telling his father about his plan and was quickly taken back to Tokyo.

“You look just like your father,” the little chef would always say.

Abner always hoped to get to know the Japanese family who his mother said he looked like. But on the inside, Abner only felt like a Korean.

This idea came about after a very fruitful trip to a large Daiso Japan discount store in Lake Forest. Everything is $1.50!!! …. *mumbles* unless price is marked. Since that day I’ve gone to two more Daisos and have purchased enough bento boxes (and supplies) to last me my work week. 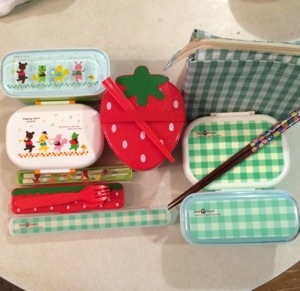 I’ve been letting the creative {and crazy} cogs inside my brain work to figure out what kind of things I want to bring to work. This was the first idea I had.

As you know (or now know), I *LOVE* KBBQ. I go at least once a month to get my fix. I thought that it would be cool to create those adorable rice thingies that Makoto (Lita / Sailor Jupiter) always had in her lunch box. I wasn’t sure if it was common to put filling in them, but hey, this is my weird hybrid.

I used Nishiki medium grain sushi rice (California grown). It’s the first time I ever made rice that wasn’t Jasmine and I’m still unsure if I did it right. It seemed too wet to me when it was done, but it seemed to absorb the excess water as it cooled.

Out of sheer laziness, I bought the bulgogi meat and shredded pickled radish from a local Korean BBQ restaurant / market (it’s not an AYCE but it’s okay, I’m gonna ask my favorite KBBQ place if they sell their meat next time I go there). I also bought kim chi from the store because kim chi is awesome and I am too lazy to attempt to make it (and slightly intimidated.)

This is how the process went (after cooking rice and meat and letting it cool):

1) Fill mold (purchased also at Daiso Japan) 1/3 high with rice, molding it up against the walls, creating a wee well.
2) Fill well with with a mixture of chopped bulgogi and pickled radish (or kim chi)
3) Cover the rest with MOAR RICE!!!
4) Decorate as desired 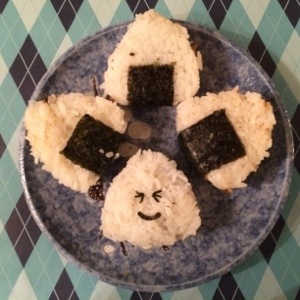 Mmm… so cute and yummy!

I’m going to make the filling and get it ready for when I work again on Thursday… that’s assuming I don’t eat it before then.

Until next time readers! *mumbles* which hopefully won’t be as long as it was before.

3 Responses to Abner: The Love Child of a Japanese Discount Store Magnate and a poor Korean Chef