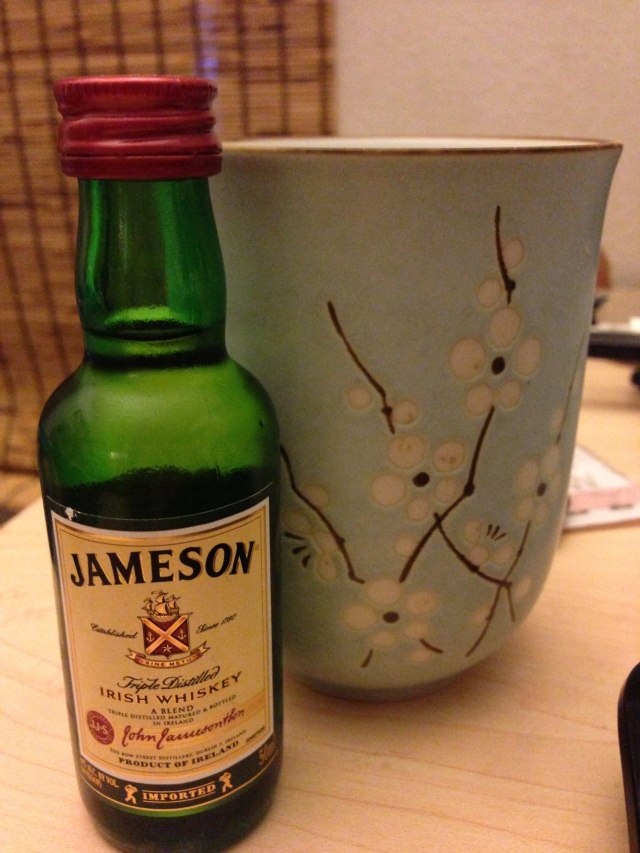 I have a fancy whiskey glass somewhere… I just don’t know where it is.

It’s a blue Monday here at MEESHYland, well it was a bit of a blue evening last night as well. That’s why this entry is a day later than I wanted, though you wouldn’t have known that if I didn’t say a damn thing. I’m enjoying the last bit of my homage to Ireland with a bit of Jameson, which isn’t so bad.

Saint Patrick’s Day began as any other day when Big Momma Bee is off: we discuss where we’ll go for groceries/adventuring (more grocery than adventuring, but it’s still nice to do). Big Momma Bee and I talked about going to the Saugus Swap Meet, but then decided that it’s not financially sound for us to be buying bowls right now. And while we didn’t go vintage Pyrex hunting, we did end up going to my mother’s favorite (and my second favorite) supermarket… 50 miles away from MEESHYland. 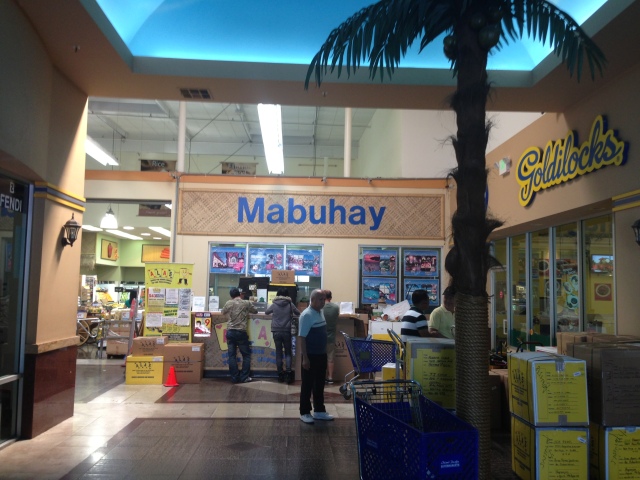 Island Pacific is located in Panorama City and was once a Ralphs, way back when I lived there… yes, I do remember it being a Ralphs, even though I was 4 when I moved here. Or was it the other building that was a Ralphs? Anyways that was the area where we used to live before we moved here. Island Pacific is a Filipino supermarket filled with… Filipino-ness. There’s also a Seafood City (yet another Filipino supermarket) down the street and while it’s cleaner, we prefer the fish selection at Island Pacific. That’s really the only reason Big Momma Bee loves going down to our old neighborhood. She gets tired of frozen Bangus (that’s milkfish in english, I think) and longs for variety. If money wasn’t an issue, I’m sure we’d go there once a week. My mom loves fish. 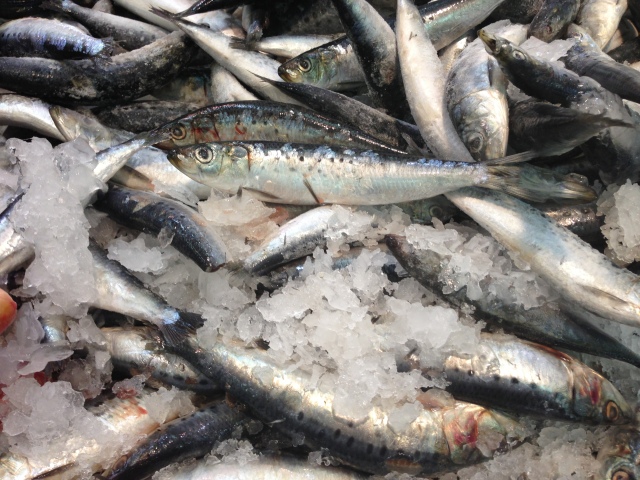 Also, they usually have superior asian vegetables (compared to our wee markets here), though at this last excursion, Big Momma Bee said that the eggplant was ugly. I was trying to convince her to let me buy some purple yams, so I could attempt a purple yam pie or something, but she said $2.49/lb was expensive.

My favorite part of going to Island Pacific is the SNACKS!!!! I like to think of my childhood as a very odd mix between my old people’s world and a typical American childhood. Like before, when Island Pacific was Ralphs and the Filipino market was where DJ’s Bibinkahan is now, I liked to ask my mom for Yan-Yans (an asian cracker stick thing that one dips in chocolate) and a Flintstones Push-up sherbert thingie. So my love of terrible foods is definitely an international affair.

Shrimp Chips and Yan-Yans… my childhood. I don’t check the ice cream aisle for if they have Push-Ups because the prices for ice cream is too depressing.

Going to Island Pacific definitely brings out the Filpina in me, which isn’t as strong as I wish it was, but what can you do? Usually for St. Patrick’s Day, Big Momma Bee will make this very weird Mom-a-pino version of corned beef and cabbage using the canned corned beef. But as Daddy Bee has heart problems and Big Momma Bee is FINALLY *trying* to listen to what her doctor is saying, she decided against having the beef. I think they had salmon yesterday… as for me… since I was at a place where you can actually get your meats cut on the premises (I’m sure there’s one or two here, like that nice butcher I’ve mentioned before, but I’ve never actually asked a person to modify the meat that I was buying), I asked the kind gentleman behind the counter to cut some paper thin top sirloin beef. I made bulgogi… again.

I know the price isn’t showing, but corned beef is freaking expensive these days! Even the cheap kind!

While my dinner wasn’t super traditional for an Irish holiday, I did decide to get a wee bit Irish on St. Patty’s. Why? Because I love Irish guys… or well actors who play Irish guys. I’ve never been fortunate enough to meet a real Irishman, but I’m pretty sure I’d swoon… or try to become best friends with them. I find Ireland fascinating. It’s in my top 10 on the traveling bucket list.

I made Irish Soda Bread using the recipe I found at Green Eggs & Spam. I used dried cranberries instead of raisins, but that was more of a preference thing anyway. 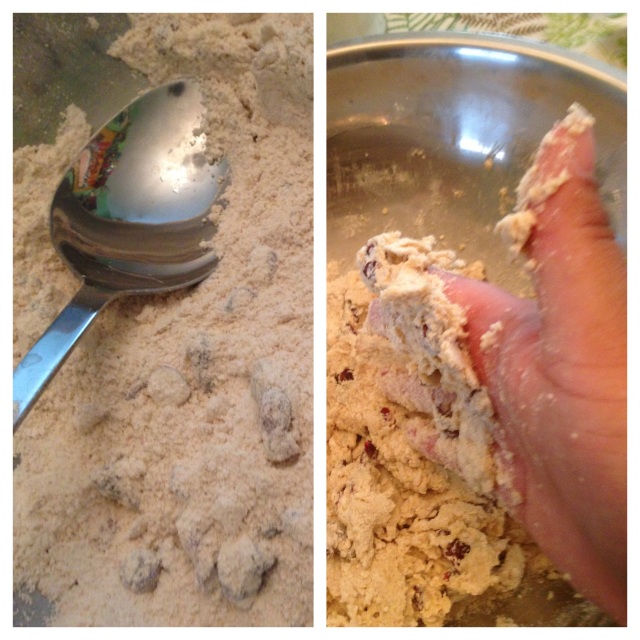 Mixing with my hand was much easier. Though not so photography friendly.

While I let the bread cool, I went to drop some Mamom (Filipino sponge cake) at Kooyah’s house for Big K and Little K. I didn’t stay long, but stayed long enough for Little K to warm up to me (which takes FOREVER) and for Big K to latch onto my leg and try to convince me to stay for a little while longer. When I was by my car, Little K and I had this conversation:

I need a Little K translator.

After going to see my boys, I went to bevMo! to buy the drink that I’m currently still trying to finish and something to accompany my meal. I found an Irish Hard Cider that I thought I’d try since I don’t like beer.

It went pretty well with my meal, but I’m not one for pairing alcohol with the right sort of meal, so it could have been the wrong thing all together to have with bulgogi.

After dinner I tried my soda bread with some nice Kerrygold salted butter. It’s my favorite bread butter. It’s too fancy to have in the house all the time, but it’s nice to have on splurgy days. I liked the density of the bread, but the flavor was a bit blah, I don’t know if I over-kneaded or under-kneaded or didn’t use enough sugar for my sweet tooth, but like all of my odd attempts… it was a bit… amok. Or it just didn’t go well after the dinner I had. I’ll have it with coffee in the AM.

Don’t worry, the butter was shared amongst the two pieces, I just wanted to have a pic where you could see the craisins and I almost forgot to take one!

Apart from the overwhelming sadness that kicked in after I cooked and baked, my St. Patrick’s Day was nice and boring, like me. I hope yours was good and merry.

To St. Patrick and all my readers, I raise my atypical whiskey cup and say “Sláinte!”