Well I thought that was going to be easier than it was, but it turns out that you need a whole lot of elbow grease to get it done. But it should be worth it.

I grew up on pastillas. Well, at least whenever we could afford them or a relative came home from the Philippines. It is my favorite filipino candy and I would always try and buy some when we’d go to Goldilocks Bakery in Panorama City. However, the last time I bought them they were over $6 for a wee bag. I had complained about it on twitter (follow me @theMEESH) and my good friend Chel told me it wasn’t too difficult to make. 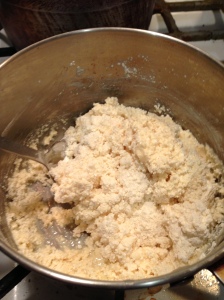 I put it in the pot and started to stir.

And stir some more.

And stirred even more. My arm hurts.

Seriously, I should have picked a different late night recipe. I don’t even eat these as much as I used to. After stirring… and letting it cool while watching Supernatural, I worked it onto my table. 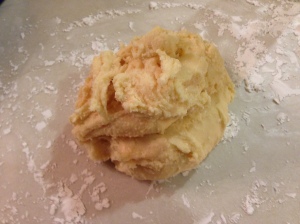 And work it was.

Now I’m supposed to roll this out, but well see… the thing is, I don’t own a rolling pin. Sure I could go buy one at Wal-Mart, I go there often enough… but I can’t bring myself to buy one. So I used this: 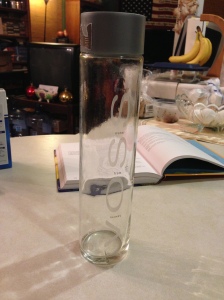 Best $3 rolling pin ever! And came with free water. It’s the glass one, BTW.

Rolled and cut into nice and uneven pieces. I really didn’t feel like putting much effort into it after the arm workout.

And then after all that… I spent a half an hour wrapping these little suckers. NOM NOM NOM. I’ll probably never want a pastilla for the next 6 months. 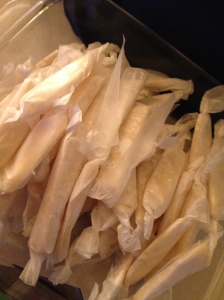 Messy Meesh: Learning How to Cook and Live a Happier Life
View all posts by mischameesh →
This entry was posted in Filipino, Learning to Cook and tagged Cooking, Filipino Cooking, Sweets. Bookmark the permalink.